"I've been expecting you, Mr. Bond…" There's a brand new, one-of-a-kind cinematic installation now open on the top of a mountain in Austria and it's amazing. Open to the public today (July 12th) in Sölden, Austria is 007 Elements, a new James Bond museum/experience that is a spectacular, sleek, thrilling permanent adventure into the world of 007 and its 56-year history. This installation has been under construction for two years, and it's finally open. I was lucky enough to visit Sölden earlier this week and get a sneak preview inside of 007 Elements, joining a group of the most die-hard 007 fans from other Bond websites/fan clubs all over the world. We were all very seriously impressed. Sölden's 007 Elements installation is even better than I expected, entirely worth the trek into the mountains and up to the top of Gaislachkogl to experience.

I first heard about the "007 Elements" installation over a year ago, when it was first announced from the @007 Twitter account. I have been following updates closely, waiting for it to finally open. I was planning to go by myself to check it out, but I was invited by the Bond team to go down to Sölden for a press preview on Tuesday morning. They had only released a few pieces of concept art before its opening, so no one knew what was inside. It was a surprise to all of us that morning. And let me tell you, it is truly Bond heaven. As a huge, huge lifelong James Bond geek, this place is totally amazing – seriously jaw-dropping, exhilarating, amazing. It's so beautifully designed and built right into the top of the mountain, built inside of the rock and permafrost. And it's entirely about Bond, with a focus on Spectre, as well as the entire 007 franchise history.

Here's the preview for 007 Elements. You can buy tickets and learn more at 007elements.soelden.com. 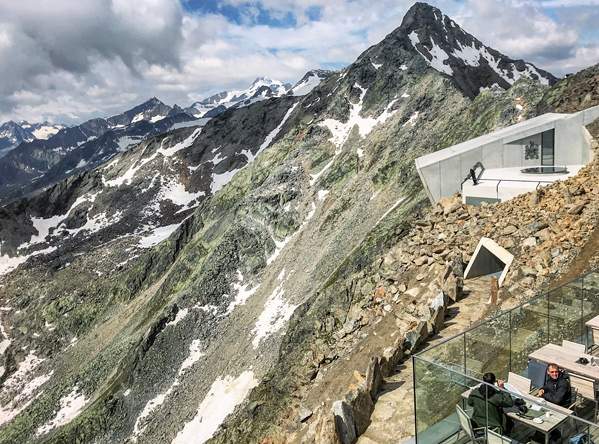 The idea for this installation first came about when they were filming Spectre back in 2015. The location scouts first discovered the restaurant building Ice Q on the top of Gaislachkogl mountain in Sölden, Austria. Director Sam Mendes and production designer Dennis Gassner thought this was the perfect location, so they filmed an early meeting between Madeleine Swan (Léa Seydoux) and James Bond (Daniel Craig) there. And they choreographed a huge action scene in the mountains, filming most of it on location in Austria in the mountains. Bond swoops down in his airplane and goes after Swan, who is escaping in vehicles driving through the mountains. It's one of the best action scenes in the film, and even more impressive knowing that they shot most of practically in the mountains with real vehicles & special effects. This is always important with Bond - they want it to feel real, so they film for real, at real locations. Now you can visit this exact spot.

From here, the CEO of Bergbahnen Sölden partnered with Eon Productions and Optimist Inc to design and construct this James Bond installation. The focus is on Spectre - half of the experience is about how they filmed and designed and orchestrated the huge action scene. It's one of the best behind-the-scenes looks at filmmaking I've ever seen, and this is coming from someone who has been to filmmaking/cinema museums all over the world. The "Action Room" near the end contains the actual airplane set piece they used during filming, along with impressively detailed yet minimalistic dioramas showing how they choreographed and shot the action scenes in Austria. As a movie geek, it made me very happy. It shows how much attention to detail there is in every single aspect of on-location filmmaking – between multiple cameras, FX rigs, support vehicles, and much more. My compliments to whoever designed these making-of dioramas – they're superb. 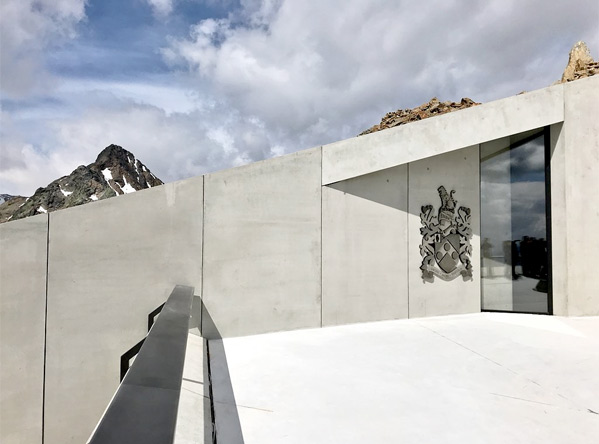 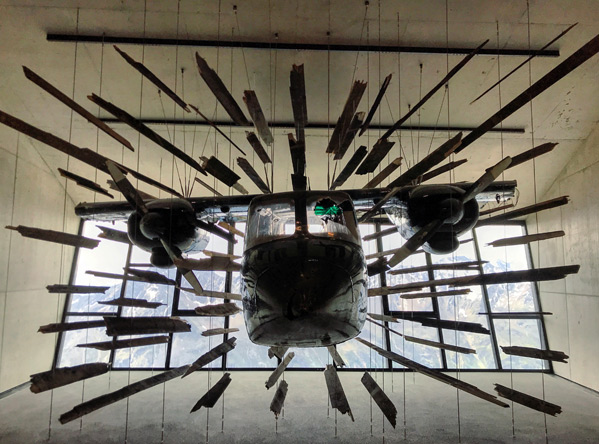 The entire 007 Elements installation is designed to feel like an authentic James Bond location straight from the movies. This isn't the first set on top of a mountain – this is a common theme in Bond movies. Another iconic mountain-top location is Schilthorn, or Piz Gloria in Switzerland, used during the filming of On Her Majesty's Secret Service as Blofeld's lair. This location can also be visited and it contains a small Bond museum as well. But it's old, and falling apart, and it honestly doesn't even compare to 007 Elements. This installation in Sölden is brand new and so sleek - designed by the brilliant architect Hans Obermoser. Most of it is cement, with strong angles and smooth lines, as well as gorgeous contrast between light and dark. Some of the rooms are very dark, with video screens and presentations, and then you turn the corner to find yourself standing in front of huge windows overlooking the valley below the mountain. It's amazing.

At the start, you walk through the "Barrel of the Gun" - a hallway that condenses and feels like going into the barrel of Bond's gun. Here a video screen showing the opening musical sequence to Spectre is playing with the theme song. This immediately introduces you to the world of Bond and gets you in the mood to explore deeper. The gondola to the top also contains a few special gondola cars themed for the installation, featuring Bond music in them as they ascend. The next destination is an open outdoor patio, without much to it except a huge steel-cut version of Bond's Coat of Arms - which was also featured prominently in On Her Majesty's Secret Service. The words in Latin at the bottom state "The World is Not Enough". Of course. I really love how minimal and simple and sleek the entire installation looks, so beautiful compared to many other museums and installations I've been to, just perfect. It really feels like you're going into 007's world. 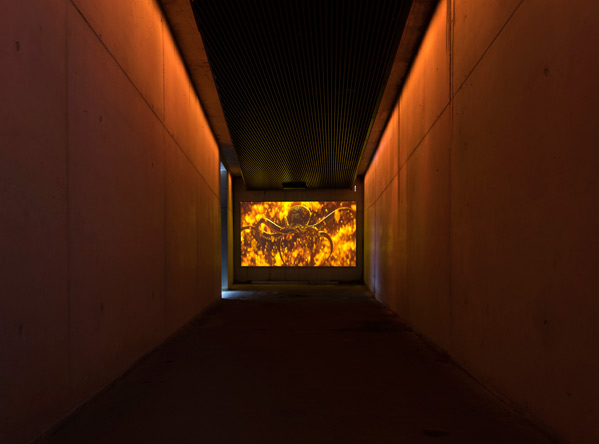 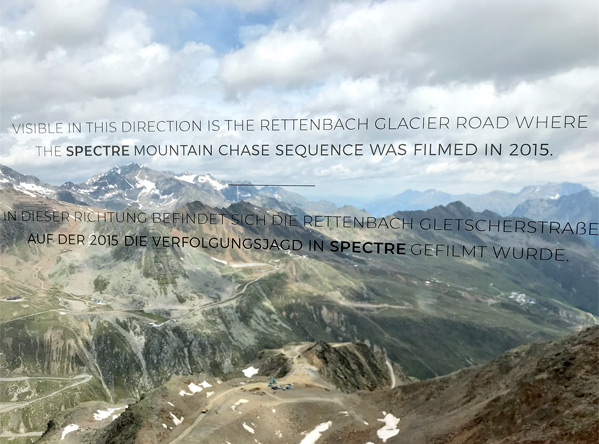 After this introduction, 007 Elements features five or six various themed rooms relating to Bond history and the making of Spectre. It's designed to be a walk-through experience. They even want people to ski right up to here, walk through with their ski boots on, and ski right out during the winter. It's rather chilly inside, so a jacket is important. One of the rooms, the "Villain's Lair", contains two huge video screens and mirrors placed opposite of each other - creating that infinite mirror effect. It reminds me of a few other villain's lairs from the Bond movies, mainly the mirror maze from The Man with the Golden Gun (see here). They created a one-of-a-kind Bond video sequence for this room, that goes back through Bond history and features all of the eccentric, iconic characters from the movies. Next up is a "Briefing Room", showing how they setup and choreographed the action scenes in Sölden. From here you get a window view of the area where they filmed.

One of my other favorite rooms inside of 007 Elements is the "Tech Lab", designed to feel like Q's secret lab where he is making the latest Bond tech to use on his missions. They wanted it to feel futuristic and full of modern technology, so it has a number of interactive stations where you can pretend you're also a "00" agent about to go on a mission. There's a conceptual recreation of one of the cars from the most recent Bond movie, and computer screens that allow you to explore the nifty features inside of it. And best of all (for Bond geeks like me) there's a collection of actual props from the movies on display with interactive screens. The props include: the golden gun from The Man with the Golden Gun, the rebreather from Thunderball, the ski gun from The Spy Who Loved Me, the exploding pen from GoldenEye, and a few other surprises you have to wait to discover for yourself. It's not only about Spectre in 007 Elements, and that makes me happy. 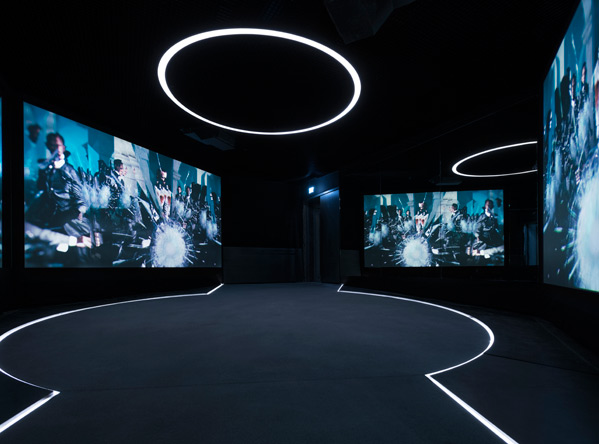 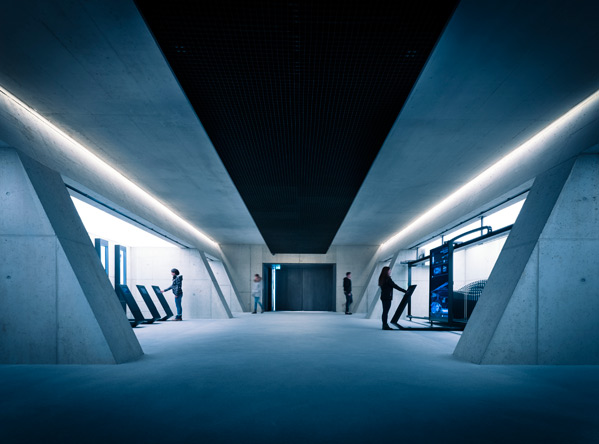 I really, really loved visiting 007 Elements and I say this completely honestly - it was even more impressive than I thought it would be. I have been to various James Bond museums and exhibitions all over the world, and this is the best. There could of course be more rooms and more props, but that's just me dreaming. For what it is and all the work that went into it – it's beautiful, it's exciting, and it's thrilling. It's not cheesy like most museums about filmmaking, it's not boring like most on-location experiences, and they have enough inside to satisfy hardcore Bond geeks and casual moviegoers alike. Aside from the actual installation, two of the vehicles used during filming were seen on the mountain - one stunt car in the gondola station, and one stunt Land Rover vehicle stuck on the rocks at the very top of Gaislachkogl. They're happy to acknowledge this location as the location from Spectre – they want to show how real it is, not a made-up place in a movie.

We were joined on our preview by: Neal Callow, the creative director for 007 Elements (who has worked as art director on Casino Royale, Quantum of Solace, Skyfall, Spectre); Tino Schaedler, the head of design for Optimist Inc which designed the experience; Jack Falkner, the CEO of Bergbahnen Sölden; and Meg Simmonds, an archivist for Eon and 007 who hand selected the props for display in the installation. They all seemed entirely satisfied with the installation, a befitting James Bond experience unlike anything else in the entire world. It's worth the trek, since it's not exactly easy to get into Sölden (a little ski town in the middle of Austria), and I mean that. I already have a desire to go back and experience it all again, and bring my friends and family to see it as well. I want every last Bond fan I know to go here. It's not just a museum or a tribute to 007, it's like stepping into the movie and going to a real villain's lair or secret meeting place. 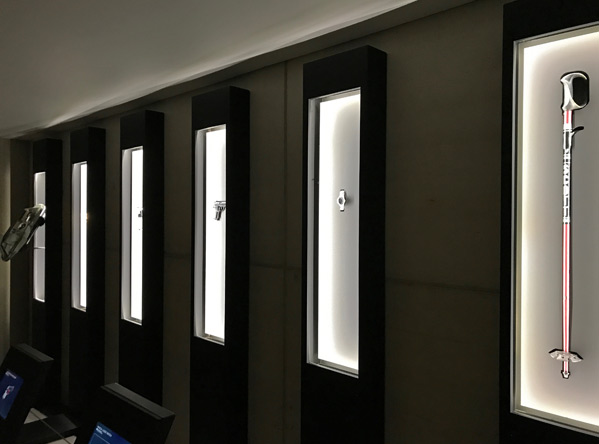 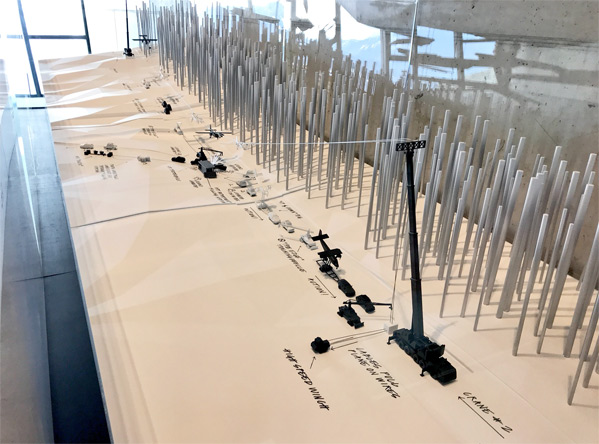 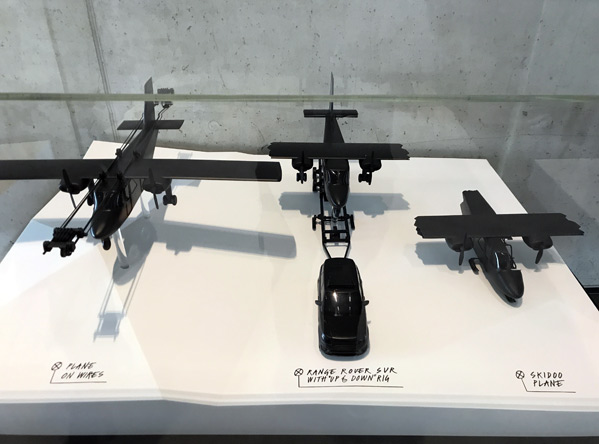 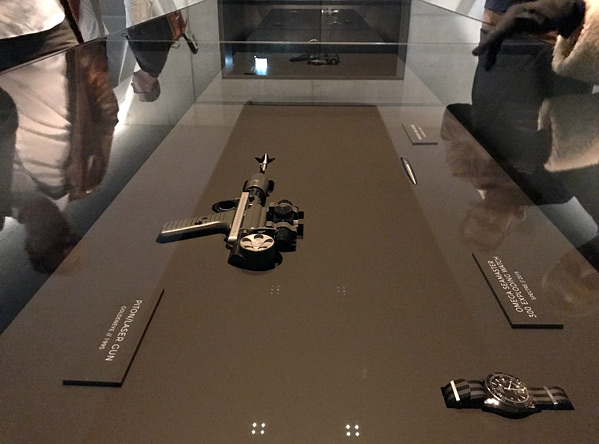 Thank you to Bergbahnen Sölden, Eon Productions, and the entire 007 team for allowing me to experience this amazing place first hand. And thank you for crafting such an exhilarating new experience for Bond fans. The 007 Elements installation is now open to the public - anyone can visit it and check it out for themselves. You can buy tickets here, which include the gondola ticket to the top of the mountain and the entry fee for 007 Elements. It's a full-on, interactive 007 experience, with special video presentations, immersive audio, touch-screens, and much more. It's the place James Bond fans have been dreaming about - a meticulously designed, compelling, immersive installation that makes you feel like you're a secret agent yourself. And it's located on top of Gaislachkogl mountain in a stunning region in the heart of Austria. The views alone are breathtaking. I'm so happy I had the chance to see this place for myself and I cannot wait to go back again.

For more info on 007 Elements, click here. For more updates on the world of James Bond, follow @007.